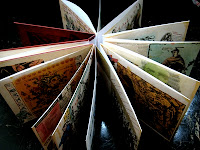 Here in in the land of Facebook, Google and Twitter hardly a day goes by without a constant mention of ebooks, social networks or a super-wired generation awaiting the next digital technology. So, when I tried to explain to some friends that I was attending a fair for the book arts and another one for antiquarian books and manuscripts, the landscape got a bit too nebulous.

But there I was, at the Codex Book Fair, already on its second day of workshops and meetings, ready to hear about fine printing in Mexico from Juan Nicanor Pascoe, perhaps the best-known Mexican master printer. He not only (re)claimed his Mexican heritage, but delighted a SRO audience on how he arrived at his trade, via Iowa, finally settling at his current locus amoemus,(Tacámbaro) in rural Michoacan.

A few days later on an unexpected visit to the Stanford campus, Pascoe told of his other talent: music, “I am better known among musicians,” having just returned from an encuentro musical veracruzano. Pascoe is no stranger to SALAMistas, just ask Theresa Salazar (UC-Berkeley-Bancroft), Teresa Chapa (UNC-Chapel Hill) and Nerea Llamas (Michigan), who visited his Taller Martin Pescador. The name of the press was chosen by Roberto Bolaño, a yet unknown young Chilean writer who led a group of vagabond poets, infrarealistas, and for whom Pascoe published an early poetry chapbook of 225 copies entitled: Reinventar el amor.

In this milieu of fine presses, Latin America was well represented, by Pascoe and his young partner Artemio Rodriguez

and by others familiar to SALALM: Colombia’s Arte dos Grafico and California’s Catherine Docter from Libros San Cristobal, probably one of the best kept secrets in the region.

Following the book arts festival came the yearly pilgrimage for many of the same book lovers/collectors to the 44th International California Antiquarian Book Fair. As with many other things, both New York and California claim to have the best one in North America. Unlike previous years, there seemed to be fewer attendees, a sign of the dire economic times. Even so, dealers brought out their best rare/unique titles, like Gustave Doré’s Corrida de toros. At $28,000, the six prints were best admired from afar. I even felt guilty taking the profusely illustrated catalogue from the London dealer. For the less affluent, $11,000 could have been just fine for that masterpiece of 19th century Mexican cartography: Atlas Pintoresco e Histórico de los Estados Unidos Mexicanos. 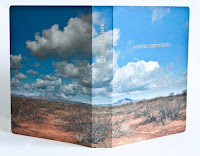 There were also items a precios módicos, like Sanctus sonorensis, a prayer-like visual text honoring the undocumented immigrants who die in the Sonoran desert.

For rare Latinamericana visits to: Bray Books, Libros Latinos and Plaza Books were a must, along with a stop at a Barcelona dealer which had brought some first editions of Lorca, Neruda, and Miguel Angel Asturias, among others. You could even find a signed grabado by the great Mexican muralist Orozco. It turned out to be false, but when I went to see it, the price was still listed over $1000.

At the end of the weekend fest, the last minute crowds seemed to have arrived. I left, 90 minutes before closing, amused at some of the clever names: Any Amount of Books, Back of Beyond Books, Between the Covers, Books of Wonder, By the Book, Carpe Diem, First Folio, Literary Lion, Lost Horizon, Sanctuary Books, and Serendipity, etc.

I kept hoping to find the dealer from whom I bought a few Mexican Revolution postcards last year. How can I forget that mujer valiente from 100 years ago, the one who defied the often mistranslation of soldadera as camp follower. I wouldn’t dare call her that, would you?

2) Juan Nicanor Pascoe and Artemio Rodriguez at a 2009 event featureing their collaborative book Tacámbaro (on display at Codex 2011). It is a fully illustrated, handprinted artist book featuring Jose Ruben Romero’s collection of poems and contains 72 black & white blockprints by Rodriguez.

3 responses to “An artist book? An antiquarian book? And it’s not an ebook?”